HPRA
USS HUGH PURVIS - DD 709
The page for HPRA Reunion Information! Covering the upcoming reunion and those in the future plus links to the past.  (Updated  2/27/2012) 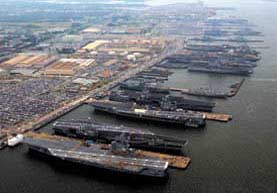 This year was, as usual, a fine time at the Norfolk Reunion. We stayed at the Sheraton Waterside Hotel in Norfolk, Virginia. The hotel is located right on the waterfront along the Elizabeth River and directly across from historic Portsmouth. Also, directly across from the hotel, are several navy ships in for repairs and upgrades, including the USS Iwo Jima (LHD-7). The hotel employees are some of the best we have encountered in our travels. All were very courteous and extremely helpful.


The rooms were good and the hospitality room was one of the best. There were plenty of places to dine, generally within walking distance, so hopefully everyone found something to their liking. We had breakfast included during our stay in the hotel restaurant. It was buffet style with just about anything you wanted, including an egg/omelet/waffle station. The only problem we had to put up with was the weather - RAIN. This caused some changes to our schedule especially on Friday.
The tours for Friday were scheduled to begin at 8:30 with a walk to the Victory Rover tour boat to join in with the parade of Tall Ships out on the water as part of HarborFest Weekend. Due to the poor weather, the parade had to be canceled and the Tall Ships came in on their own, under motor power, Thursday evening and Friday morning. After waiting in the hospitality room for an hour the rain stopped and we did board the Victory Rover for a tour of the harbor. This took us out towards the main channel and past the Norfolk Naval Base. The boat operator pointed out the ships in port and what they were. Destroyers (new ones), a submarine and Aircraft Carriers. The USS Enterprise (CVAN-65) is there and in the process of being dismantled.

Friday afternoon was a tour of the Nauticus Museum and the USS Wisconsin BB-64. We had our memorial service in the theater of the Nauticus due to the weather. Julius G. played taps and we had a bag piper. The wreath was then carried out to the Wisconsin by Steve and George to be dropped in to the water. Had the weather been better, the fantail was set up for us, but decks do get slippery, and the weather was to unpredictable.

For Friday night, many had signed up for a dinner cruise on The Spirit of Norfolk. We had about a 105 in attendance. There was a buffet dinner with a lot of food, all good, plus a cash bar. There was a D.J. for music. A group of high school grads were there and the D.J. pretty much catered to their music; maybe 10 to 1 even though we out numbered them 3 to 1. Other than that it was a nice evening. There was some rain with a little wind, but you did not notice it while underway. (I do know a couple of shipmates that took Dramamine anyway.)

On Saturday we left the hotel by bus around 9 am for Newport News to tour the Mariner’s Museum and Monitor Center. This is a really good place to visit. While we only had a half day there, to see all they have, you really need more time. Anyone vacationing in the area should make this a must see, reserving a full day. It includes eight different areas of naval history and artifacts.They have an amazing display of the USS Monitor, including a full size replica of the deck, and the original gun  turret, which was recovered off the NC coast. There is also a photo presentation of three well known photographers, Ansel Adams, Ernest H. Brooks II, and Dorothy Kerper Monnelly.

Lunch was supposed to be at the museum, but it turns out the cafeteria was not open on Saturday. We all piled in to the buses and went to the food court of the MacArthur Center Mall. With many choices, no one should have left hungry. (Only had 35 minutes to get it and eat it.)

Leaving the mall, we went to the General MacArthur Memorial and Visitor’s Center in Newport.The generals life was presented from beginning to end. A good amount of time to spend there is a half day to really see it all. We left there around 3:15 heading back to the hotel for the annual HPRA business meeting.

The HPRA business meeting was held in the hospitality room immediately after the Saturday tours. The treasurer’s report was read, and approved, as well as the minutes from last year’s meeting. There was a lengthy discussion about the 2014 reunion, as George has had some issues in getting an acceptable contract for a hotel in Cleveland. It was finally agreed to move the 2014 reunion to Jacksonville, Fl.,  April 24-27, 2014.  Some members agreed to look into locations for 2015, and a vote will be taken electronically for that selection once all of the necessary information has been collected and disseminated to the organization members.

The Annual Saturday Evening Dinner was held starting at 7pm, preceded by the photo session for the various groups --- everyone, shipmates and the various periods (40's, 50's, 60's,70's). Some of this will be on the photo site when available, along with many photos from the attendees. Our bag piper was there to open the proceedings. The dinner was excellent, and the large slice of chocolate cake was maybe the best ever, with lots of calories. The prizes for the drawings are getting better each year. After the normal prize drawings, the 50/50 and the three free nights, there was a separate set of three drawings,  two quilts and a blanket where that money will go to help pay for the Hugh Purvis Navy Plaque, now on display at the Navy Memorial in Washington D.C. There is a link to the plaque on the home page. The evening ended with an incredible fireworks display out in the harbor as part of HarborFest weekend.

Thus all good things must come to an end. Sunday morning was checkout and saying goodbye during breakfast. It was also a good time to stroll through the HarborFest area and see what was happening. A few were staying a couple more days to see more of the area while others had flights to catch or other places to be. (Select for details --- HarborFest)

So, Its "See you next year" in Jacksonville FL. It is hoped that it will be as successful as this one, with less (or no) rain!

PHOTOS from the NORFOLK AREA
(Hover mouse over photo for title) 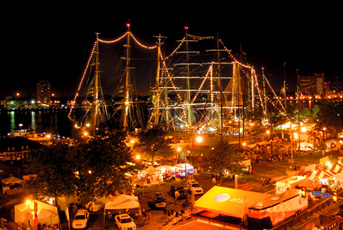 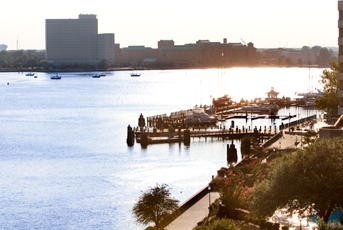 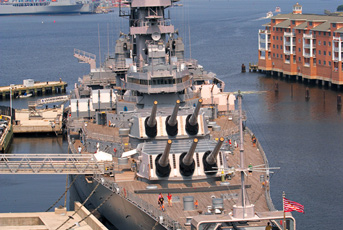 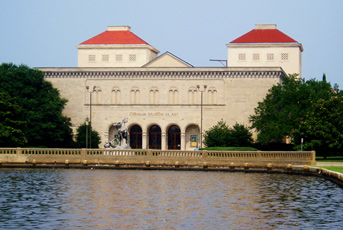