HPRA
USS HUGH PURVIS - DD 709
The page for HPRA Reunion Information! Covering the upcoming reunion and those in the future. Check back often for the latest. (Updated  3/06/2011)

As usual, everything began on Thursday afternoon, with registration in the hospitality room from  3pm on. The shipmate packages with our tour information, dangler pin, ID cards etc were available for pick up. This year they were presented in a red white and blue tote bag that also contained a specially designed umbrella and any shirts and hats that were ordered (see photo's below for these items). The shirt was a special 20th anniversary button down light blue one with a special custom logo for the occasion. The shirt was ordered special being the 20th anniversary of the HPRA `and to be worn for the Tomb of the Unknowns ceremony on Friday afternoon.  George B. outdid himself this year. A fair number of shipmates came one or more days early so as to see more of the sights. There is so much to do, you would need a week or more to visit it all.

Friday morning began at 9 am by boarding the buses and heading down to Mt. Vernon. Two large ones were needed and each had a tour guide to point out all the good things we passed. Mount Vernon, being the home of George Washington, is very impressive. You can see how they lived so many years ago. Included at the site is an educational center, a museum and two movie theaters. Before one begins the tour you see a 20 minute movie on his career from 1757 through the revolution. Very good. If you have not been in recent years, you owe yourself a visit.

After lunch (on our own) we boarded the buses and headed for Arlington National Cemetery. Here we all boarded our private tram for the trip to the Kennedy grave site and the Eternal Flame. Other special grave sites were pointed out during the ride. After this we went to the Tomb of the Unknowns for the Changing of the Guard, followed by a wreath laying ceremony with the Army Guards and the HPRA Officers (George Baker, Steve Singlar, Wade Botsford and Ken Quenstedt). This was quite impressive and moving. Prior to the ceremony, our Officers had to check in for inspection by the Sargent of the Guard. All of the guards are Army enlisted personnel and must adhere to a strict clean way of life. The ceremony included the wreath laying and taps by an army bugler. (There will be video on the Videos page soon.)

Saturday we once again boarded the buses at 9 am for the trip in to Washington D.C.  The main part of this tour was to see the war memorials - the new WW II Memorial, the Korean War Memorial and the Vietnam Memorial. What a site. The sites listed here are links so you can read about them. We were able to roam around until 12:30, as we were basically in the mall area (the reflecting pool was not reflecting as it is being overhauled).

After the memorial tour, we boarded the buses again and headed to the Navy Memorial in D.C. across from the National Archives building. There are some interesting displays there and a computer setup to view your navy service. (Click on "Navy Memorial" above to access this.) Some found what they were looking for, many did not. There is a way to add your information with this link. Lunch was available here at a local deli, good food, busy place.

Following this the buses took us on a windshield tour of D.C. pointing out many of the government buildings, landmarks and museums there. I would say we passed more than 50% of them. We then headed back to the hotel for the business meeting followed by the group photos and the annual dinner.

At the business meeting, we went over old business as usual then George told the group he would step down as president after two seasons. Steve Singlar was nominated for president, George Baker for Vice President and reunion coordinator. Wade Botsford and Ken Quenstedt retained their positions and all were voted in with one vote cast and no decliners.

It was also decided that the HPRA Directory will be published every five years, with updates provided as necessary. The full version will always be on the Y!Group. It is costly to do this each year. Also, a full version can be emailed in PDF for if you like.

The next three reunions are set - Newport in 2012 - Norfolk in 2013 and Cleveland in 2014. George will coordinate all of there. Cleveland was presented by Bob Ambrico, and the others by George.

And as usual, everyone had a good time at dinner considering the amount of chatter going on. There were three drawings for free nights, one for one night and two for two nights each. There was $600 collected for the 50/50, thus $300 to the winner. A number of other door prizes were handed out including series of hand made items by Allein Sampieri. There were two plank owners and they were presented with a small gift. I don't have names of the winners, but maybe George will send them to me.

Also: for the Virginia is for Lovers book:

PHOTOS of the REUNION ITEMS
(Click on each for larger view)


Note: the womans shirt was ordered
special for a womans fit and long sleeves.


Some of the sites (hover over for titles)... 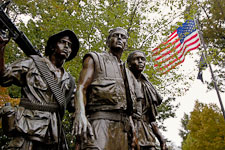